THE MARKET MAKERS HAVE SPOKEN: Choose Your Investments VERY Carefully

We are now officially in the Clown World era. California House Speaker Nancy Pelosi just said that increased U.S. government spending would help decrease the national debt and bring down inflation at home. Seriously, this is what today’s investors have to deal with now.

Meanwhile, Joe Biden just signed a massive spending package that was approved by both chambers of Congress, which includes $1.5 trillion in funding just to keep the federal government open. The politicians will brag about the $13.6 billion in emergency aid for Ukraine, but that’s only a small sliver of $1.5 trillion.

The budget includes $728.5 billion in discretionary funding for the Department of Defense for fiscal-year 2022 (which began in October), representing an increase of nearly 5% over fiscal-year 2021 defense spending levels.

So, a nearly 8% CPI print shouldn’t be a surprise to anyone, though the Federal Reserve had to act surprised that inflation wasn’t actually “transitory.” Now, the Fed has no choice except to raise the Federal Funds Rate several times this year, at the very least. 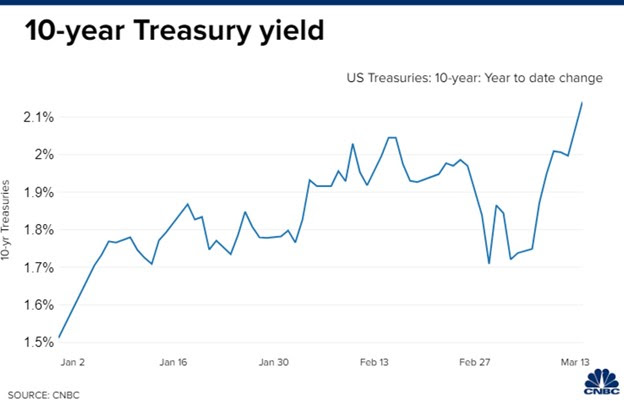 The first series of interest rate hikes since 2018 will be a historic occasion, but not unexpected in the markets. No one is expecting Fed Chairman Jerome Powell to do anything drastic, but it’s a tightrope walk since the Fed has to clamp down inflation by slowing down the economy somewhat without scaring the financial markets too much.

Of course, this is all easier said than done. With oil prices touching $130 per barrel not long ago, across-the-board inflation is likely to persist for a while, and every FOMC meeting in 2022 will be a make-or-break event for the major market indices.

Unfortunately, the Fed is facing its biggest test at the worst possible time because the majority of large-cap companies are struggling this year. Year-to-date through March 11, 2022, nearly half of the stocks in the S&P 500 were down by more than 20% from their most recent 52-week high. 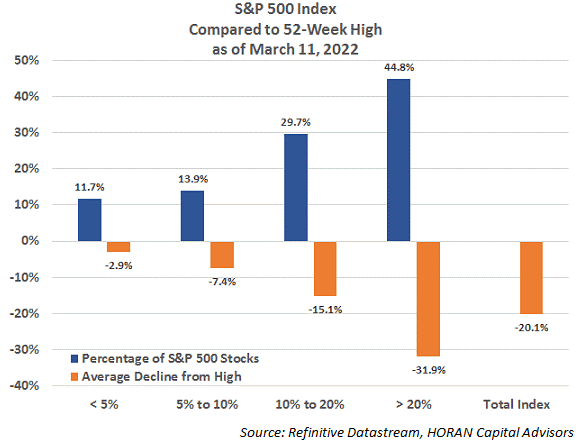 Some traders who got caught in the growth-stock trap last year are paying the price this year. Examples of stocks that recently declined 50% or more from their 52-week highs include Snowflake, Robinhood, Wish, Peloton, Roku, Affirm, and Opendoor.

If you’re considering hiding out in foreign major-market indices, think again. The Russian stock market (known as the MOEX), which tumbled 33% the day Russia invaded Ukraine, is going through its longest-ever trading halt – in other words, Russian stocks are literally un-investable.

Chinese stocks aren’t doing much better. As of March 14, American depositary receipts of Chinese firms were down 72% from their peak last year, so China is effectively experiencing its own version of America’s Dotcom bubble burst.

Index-fund investing will be treacherous this year, but you don’t have to play that game if you don’t want to. While the NASDAQ and S&P 500 hang in the balance and global stock markets teeter on a knife’s edge, selective stock-picking can still provide outstanding returns this year and in the years to come.

It’s a bloodbath out there and it’s why it’s important to be picky and have a shopping list of stocks to own when the prices get attractive and the business has a solid future outlook. Watch list here…

So, choose your battles carefully and aim for both growth and value among the market’s best stocks. Many of these will be hidden gems – able to prevail amid the turmoil and help you build wealth regardless of what the Russian, Chinese, and U.S. governments do or fail to do.