Buying stock market index funds works, until it doesn’t. This is going to a hard-learned lesson as legions of amateur traders, lured by meme stocks and social media chatter of “diamond hands,” painfully witness the market principle of “stairs up, elevator down” in action.

The problem is, retail traders have been listening to the wrong people. Federal Reserve Chairman called inflation “transitory,” and the White House promised to “build back better.” They tried to spend their way to prosperity, which has never worked historically and isn’t working in the 2020’s.

Of course, it’s easy to spend someone else’s money – that’s what politicians do best, after all. Between the Covid-19 crisis bailouts and the much-touted infrastructure bill, the U.S. Congress managed to enact $7 trillion of new spending. We’re talking about $54,000 per American household – and we’ll all end up paying for it, one way or another.

Actually, we’re already paying the “inflation tax” now, in the form of 8.5% annualized Consumer Price Index growth. In other words, you’ll have to make a lot more money this year just to avoid a loss in your purchasing power.

And, the spending spree isn’t finished – not even close. When you eliminate the accounting tricks, the White House’s $1.8 trillion “compromise” on green energy and social entitlement spending will actually cost over $4 trillion over the next decade.

Even prior to those additions to the U.S. national debt, we’ve already reaching an unsettling milestone: over $30 trillion dollars in debt, which translates to $91,000 per citizen and a jaw-dropping $242,000 per taxpayer.

Naturally, the government will use Covid-19 as an excuse for the reckless money printing and spending policy we’ve witnessed over the past two years. The reality, though, is that Covid-19 was just the pin that popped a bubble which had been expanding nonstop since the financial crisis of 2008-2009.

Savers and retirees, seeking “risk-free” income for their golden years, couldn’t count on 5% government bond yields anymore as the Fed suppressed interest rates to slightly more than 1% – and real interest rates (which factor inflation into the equation) were actually running negative.

Meanwhile, the Fed was buying billions of dollars’ worth of bonds and mortgage-backed securities every month in order to keep the banking system flush with cash. They even had to bail out the repo markets – and this kept the financial markets afloat for a while, and shielded the major market indexes from any sustained Covid-19 impact. 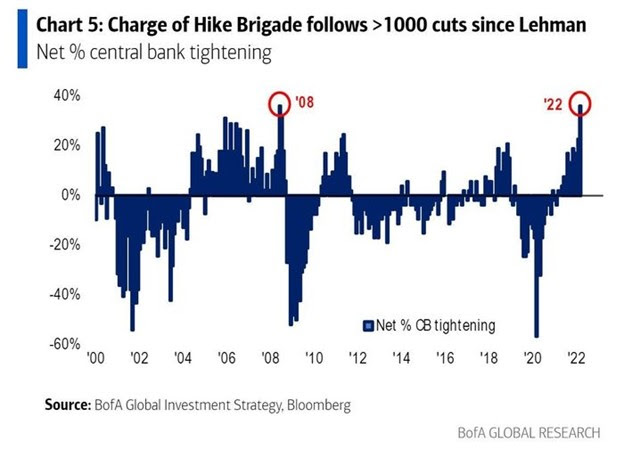 And so, we have déjà vu in the financial markets: a scenario which sounds a lot like the lead up to 2008-2009, in which the Federal Reserve and other central banks are tightening their monetary policy and investors are, understandably, getting nervous about it.

It’s no wonder that the S&P 500 and NASDAQ can’t manage a sustained rally lately. The upcoming May FOMC meeting is expected to deliver a whopping 50-basis-point interest rate hike, something the Fed hasn’t done in a long time. Heck, there’s even a talk of a 0.75% rate hike possibly in the cards, which would undoubtedly send shock waves throughout the already fragile market.

Somehow, the Federal Reserve has the thread the impossible needle: slow down the movement of money throughout the U.S. economy in order to tamp down inflation, without causing a recession. It’s an unenviable task, and probably an impossible one.

Yet, this is what the government and the central bank has wrought, and it can’t be stopped now. Consequently, the financial markets will remain sensitive to every word that comes from Powell’s mouth, even more than usual – and a diversified, inflation-resistant portfolio will be an absolute necessity as the spendthrift government doesn’t plan to back down anytime soon.